Revelations of Vethathiri Maharishi: A Base For Spiritual Science And A New Global Order

Any scientific theory trying to understand the origin of the universe has not completely succeeded so far. So the knowledge of science remains incomplete in the sense that it is not able to touch the origin. All the scientific theories come upto the point of fundamental particles but they are not able to answer the question:
Of what substance the fundamental particles are made? When a scientist meets a philosopher he says to him, “You are not logical enough”. But philosopher will say, “you are not complete”.

The concept of multi Gods divided the people into various sects and religions. About five thousand years ago there were only people but no religion. Now after and due to the arrival of many many prophets there are only religions but no people. Nobody says now, “I am a human being”: and everybody says, “I am a Christian or Hindu or Muslim or a Jew” etc. etc.

Once the people were divided in the name of God, order was destroyed on the surface of the earth. We have to create a new global order by elevating ourselves to the noble thought that there is only one God and that God has become the universe and every component of the universe. A terrorist must realize that the man he is targeting is of the same God which created him. This sense of brotherhood forms a base for a new global order. To enforce the concept of one God it is necessary for us to identify what that God is. It is exactly from this point of view we have to analyze the Vethathrian philosophy. Maharishi has identified the all-pervading space as that God. According to him if that which is everywhere is God, he says, Space is the only thing that is everywhere. So Space is God.

When we realize that all the names we are worshipping refer to the same God, the religions lose their hold on the people. Once the religious boundaries vanish, people will unite into one humanity, where everyone is equal to every other. This equality will be the first step towards a new global order.

After identifying the Space as God, Vethathiri Maharshi reveals a methodology as to how the Space became the universe. This methodology turns out to be a spiritual science. Our recent work based on the methodology of Vethathiri Maharishi gives rise to a new cosmological model which is essentially an alternative model to the Big Bang theory. Our cosmological model accepted recently for publication in Indian Journal of Physics removes certain limitations of the Big Bang model proposed about seventy years ago to explain the evolution of the universe. Thus the revelations of Vethathiri Maharishi have the potential not only to bring a new global order but also to put the modern science on a right path.
at April 30, 2019 No comments: 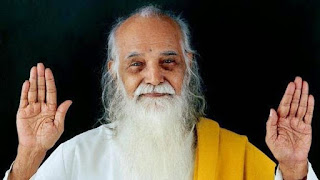 Vethathiri Maharishi
at April 23, 2019 No comments:

Revelations of Vethathiri Maharishi: A Base For Spiritual Science And A New Global Order